After reading a slew of depressing fiction that took me a while to read, I was eager to get into a fast-paced mystery. I saw trailers for the film The Little Stranger, and as luck would have it, my reserved copy from a library hold was released just as I was finishing the Saltwater Reads pick for September, Fruit of the Drunken Tree. 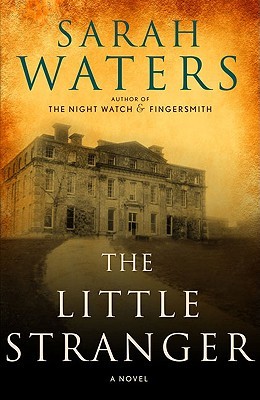 A little hardcover comparison for you guys, above. 2009 US version is on the left. The UK version, on the right, to me, resembles a Hitchcock/Patricia Highsmith classic look.

What I wanted was a quick mystery palate cleanser, but what I got was even better. A gothic, late 1940s exploration of drama, the influence of war, class struggles, and isolation. The setting sets up a decaying house once filled with joy and wealth, now filled with darkness and fear. Perfect October read, n’est-ce pas?

In post-WWII Warwickshire, England, Dr. Faraday is a country doctor who has worked his whole life to elevate his status above his upbringing. He is asked to consult at Hundreds Hall,  the home of the Ayres family: Mrs. Ayres and her two adult children, Roderick and Caroline. Dr. Faraday’s mother was once a maid at Hundreds, and over the course of the book, he becomes more connected with both the house and the family.

Roderick is literally and figuratively scarred from his experience during the war (referred to as “war shock” in the book”). Mrs. Ayres is recovering from an earlier trauma and struggling to accept the decrepit nature of the house. Caroline is caught in forced caregiver roles for both her mother and brother, while also struggling with prescribed gender roles and expectations for women in post-war 1940’s England (colloquially, she’s referred to as “plain,” and every time it makes my cringe). Dr. Faraday exposes his sensitive nature and insecurities as he tries to “fix” the ailments of everyone in the home, including the house.

In a house where things go bump in the night, and you have a motley crew of characters who seem ready to mentally collapse at any moment, everyone is called into suspicion. Suddenly the lines are blended between reason and emotion, sanity and insanity. Such is the seductive quality of the gothic mystery, that I keep returning to when I need to read a book guaranteed to delight (this was another excellent contemporary find).

The Little Stranger was a slower read for me. I think Waters did an amazing job of creating both a reliable, yet unreliable narrator (before it became trendy post-Gone Girl). Dr. Farada’s characterization as the insecure, class-anxious (is that a thing?) narrator reminded me of Daphne Du Maurier’s, Rebecca.

One of the things I loved so much about The Little Stranger is Sarah Water’s command of the 1940’s language. Coming from having read this and Madame Bovary, it made me realize that it’s a blessing to read books that are either written in the past, or written as if they were in the past. My brain is forced to sloooowww dowwwwnnn to take a closer look at language, plot, character development, etc. Another reason I’ve been drawn to contemporary historical fiction, as of late.

Does anyone else miss English class?

Sadly, I finished the book long after the film finished its run in theaters, so I can’t comment on comparison. That said, the book stayed with me for a long time, and I highly recommend it!