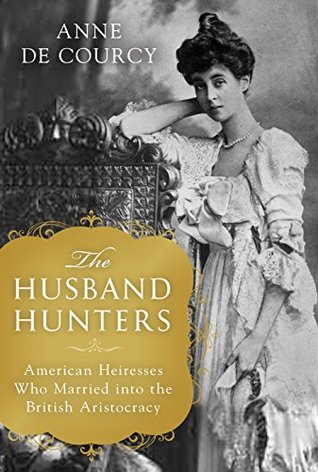 Lately, I’ve had so many books come into my life at just the right time. I had just finished Master of His Fate by Barbara Taylor Bradford, and towards the end of the book, there was a reference to the phrase “Buccaneers.” While I immediately thought of pirates, The phrase stems from the Edith Wharton novel The Buccaneers, which refers to a group of wealthy American women who were groomed for marriage to the privileged upper classes of Britain. I had a copy of de Courcy’s book on my shelf from when I requested a copy from the publisher in August, and thought this was an opportune time to pick it up.

I began to make connections with Cora Crawley from Downtown Abbey, but other than this fictional example, I realized how little I knew about the American Aristocracy (and even less about the British Aristocracy and general British history). Chapter by chapter, de Courcy walks us through the key players, mostly mothers, looking to help their daughters find loopholes into climbing the social ranks of the American upper crust. It was a mutually beneficent arrangement- British families were in need of money after being hit by a severe agricultural depression, American families were in “need” of climbing the social ladder.

I found the subject matter fascinating, and not something I think I would have normally explored on my own. I knew from historical context that many women did not have choice in who they would marry (perhaps even more in the upper class), but to see it “up close and personal” really drove the lesson home. One case in particular, that of Consuelo Vanderbilt, caused me to wince a few times while reading. Her mother, Alva Vanderbilt, trapped Consuelo in her home until she was agreeable to her arranged marriage (despite being engaged to a man she truly loved).

Even Edith Wharton’s first hopeful engagement was crushed, too, presumably by her to-be-fiancé’s mother.

I am always in awe of the lengths people will go to for social climbing. Were these “dollar princess” mothers any different from Mama Rose in Gypsy? The rules, the restrictions, the tabloids humiliating everyone (with, seemingly, no boundaries). What a depressing time! I think de Courcy really set the stage to help readers understand- people, and especially women, felt this kind of social climbing was necessary.

Despite these colorful characters being separated by chapter, I found that the many people described in the book were near impossible to keep straight. Perhaps inclusion of family trees, maps, or anything else embedded in the chapters themselves to provide clarification would be helpful.

I also wish there had been a little more context for American culture, outside of the esteemed upper class of New York. For example, de Courcy sites that it was often easier for American women to nudge their way into British society because things that would’ve made them “less desirable” (such as having a regional accent, or where they came from), were not easily detectable by their British counterparts…but didn’t go into specifics. I can make presumptions based on modern times, but what exactly did this mean in the 1800s?

De Courcy notes that there were significant the cultural differences between who “ran” the household in the US vs. Britain (US=run by women, Britain= run by men), but didn’t site historical context. For example, Southern women especially had an interesting shift in duties due to the men being off to war, an effect that I’m sure had ripple effects even after the war (I remembered this from history class, but you can read more here). Would this have merited inclusion in the book? Would it have made the book too long?

I have to give kudos where it’s due. Clearly de Courcy put a lot of effort into the research of this book (can you imagine tracking down personal letters from over 150 years ago?). I really enjoyed this book, and it’s a good jumping off point for one of my goals for 2019- to read more history books!

Source: I received a copy from St. Martins Press in exchange for an honest review. All opinions are my own.